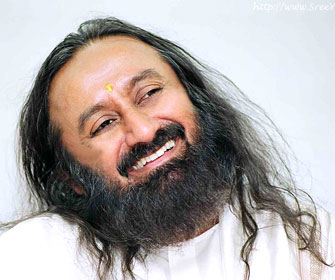 About Sri Sri Ravi Shankar
Sri Sri Ravi Shankar is a famous spiritual leader of India. He is credited with being the initiator of a foundation, known as the Art of Living Foundation. His aim in life is to teach people cope up with the stresses of everyday life and be at peace with themselves. He is also the founder of a number of charitable organizations, like the International Association for Human Values. Read this biography on Sri Sri Ravi Shankar further, to know more about him and his life history.

His Life
Sri Sri Ravishankar was born in 1956 in the southern part of India. It is said that at the tender age of four, he could recite parts of the scared Bhagwad Gita. By time he was 17 years old, he had already attained an advanced degree in Modern Physics. Some time later, he received an Honorary Doctorate from Kuvempu University of India. Other than that, there is very little information on the childhood and the early life of Sri Sri Ravishankar.

Receiving Enlightenment
It is believed that Sri Sri Ravi Shankar received Enlightenment in the year 1982. He had retreated into silence and on the tenth day of his silence, he became Enlightened. Enlightenment also bestowed Ravi Shankar with the technique of Sudarshan Kriya, a rhythmic breathing exercise.

Establishing Art of Living Foundation
In 1982, the year he received Enlightenment, Sri Sri Ravi Shankar established the Art of Living Foundation. Thorough this foundation, he promoted the Sudarshan Kriya. Today, his foundation is considered to be one of the largest volunteer-based educational and humanitarian organizations in the world. In 1997, he founded the International Association for Human Values (IAHV), along with Dalai Lama and a number of other people.

Philosophy of Sri Sri Ravi Shankar
Sri Sri Ravi Shankar teaches people to replace hatred and suffering with love and wisdom. He spreads the message of universal love, peace and brotherhood throughout the world. He aims at promoting spirituality amongst people and making them realize that there is goodness in every individual. He advises people to accept as well as respect each other.