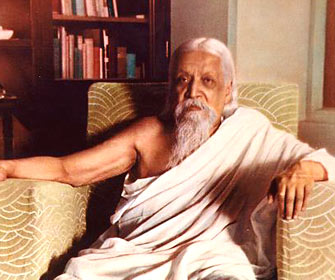 About Sri Aurobindo
Sri Aurobindo was one of the most talented as well as prolific spiritual leaders of India. Along with that, he was a brilliant writer, who published 68 volumes of sophisticated literary knowledge. All the works and teachings of Shri Aurbindo that we see today were written by him within a span of four years. After that, he never contributed even a single word to the field of literature. As per Sri Aurobindo biography, he adopted complete silence in the later years of his life, speaking on the rarest of occasions.

Early Life
The life history of Sri Aurbindo says that he was born in Calcutta, on 15th August 1872. At the young age of seven, he was sent to England to complete his education. He studied at St. Paul's in London and at King's College, Cambridge, learning Greek, Latin, French, German, Italian and Spanish alongside. As teenage approached, he felt that his mission in life was to play a role in the revolutionary changes emerging in the world and in India. After he came back to India at the age of 21, he immersed himself in the study of Indian culture.

Participation in Politics
Shri Aurbindo became a leader of the group of Indian nationalists, the Extremists, during the First Partition of Bengal. Later, he became one of the founders of Jugantar party, an underground revolutionary outfit. He was also the editor of Vande Mataram, a nationalist Bengali newspaper.

From Politics to Spirituality
Gradually, Sri Aurobindo started losing interest in politics and started getting attracted towards spirituality. He met a yogi, Vishnu Bhaskar Lele, in Baroda, who led him towards the ancient Hindu practices of yoga. He claimed to have the divine vision of Swami Vivekananda in his meditations. After spending four years in intense meditation at Pondicherry, Sri Aurobindo launched Arya, a 64 page monthly review. In 1920, he was joined by his spiritual collaborator, known as 'The Mother'. With her, developed the concept of Auroville or the Sri Aurobindo Ashram in Auroville.

Shri Aurbindo Teachings
Shri Aurobindo believed that human beings are not the end of the process of evolution. They can evolve beyond the present state of ignorance to the future state of Supramental existence. There is only one truth or reality in life and that is 'The Truth of Existence'. This reality, also known as Brahman, is absolute and not bounded by any limitations. We can recover this reality by rising from ignorance and moving on the path of spirituality.

Auroville
Auroville or Aurobindo Ashram is a society, consisting of people dedicated to the same goal of "Supramental Consciousness". It situated near the city of Pondicherry and has been built to serve as the residence of upto 50,000 people from around the world. It is like a model city of the future, which is based on the spirit of universal brotherhood.