Goddess Sita is the consort of Lord Rama. Maa Sita is considered as the ideal wife through ages.
Home : Spirituality : Hindu Goddesses : Sita 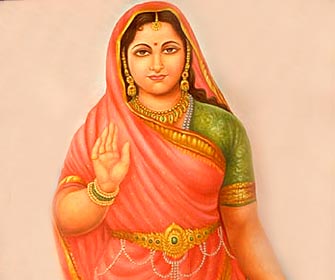 Goddess Sita Maa
Sita is the consort of Lord Rama, the seventh avatar (incarnation) of Lord Vishnu. Sita is the one of the most popular goddesses of Hindu religion. Devi Sita is regarded as the incarnation of Goddess Lakshmi, the divine consort of Lord Vishnu. Sita is considered as the ideal daughter, ideal wife, and ideal mother, since ages. Goddess Sita is remembered for her virtues and attributes. Devi Sita symbolizes all that is noble in womanhood.

Devi Sita - A Woman of Virtue
Sita is one of the principal characters in The Ramayana, the great epic of India. Her entire life constitutes an example of idealism. Sita is a perfect example of loyalty and morality. Goddess Sita leaves the palace charms and amenities, in order to stay in exile with her husband. During the period of exile, Sita was abducted by the demon-king Ravana and imprisoned for months, in Lanka. When Sita got freed from the clutches of Ravana, she proved her sanctity to Lord Rama by giving Agni - Pariksha (Fire Ordeal). Sita is regarded as the role model of wifely love and adherence to duty.

Maa Sita - Mother of Luv - Kush
After returning from the exile, Ram and Sita were declared as the king and the queen of Ayodhaya, respectively. Sita's imprisonment in lanka became a consideration for the people of Ayodhaya. Lord Rama loved his wife endearly, but with no other option left, he banished Sita from his household. Sita again found herself in exile, this time she was not only alone but also pregnant. Sita got refuge in the hermitage of sage Valmiki, where she delivered twins, and named them Luv and Kush. She brought up her sons single handedly in the hermitage.

Sita is a brave woman of extraordinary brilliance. She has got all the values that people believe, a woman must have in her character. Sita is a woman of virtue and of immeasurable patience. Through her great character, she has captured hearts of millions of people.