Sri BKS Iyengar is one of the most renowned Yoga gurus of India. Get an introduction on the biography & life history of B.K.S. Iyengar.
Home : Spirituality : Indian Gurus : BKS Iyengar 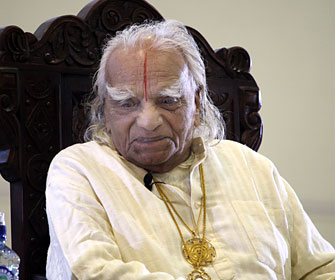 About BKS Iyengar
The full name of BKS Iyengar, one of the most renowned yoga gurus in the whole world, is Belur Krishnamachar Sundararaja Iyengar. Popularly known as Yogacharya B.K.S. Iyengar, he is man who founded the Iyengar Yoga. The guru has been teaching people the art of yoga since the past sixty years and at the same time, is the author of numerous books on yogic practice and philosophy, along with several definitive yoga texts.

His most popular books include 'Light on Yoga', 'Light on Pranayama' and 'Light on the Yoga Sutras of Patanjali'. The majority of credit for the introduction of yoga in the west goes to Sri BKS Iyengar only. One can find Iyengar yoga centers even in the remotest corners of the world. Today, the great man is over 80 years old and still stands as strong as ever. With this biography, you will get a brief introduction on BKS Iyengar.

His Life History
Sri B.K.S. Iyengar was born on 14th December 1918 in the Belur district of Karnataka. He faced difficulties in the early stages of life itself. Iyengar was born into a large poor family and immediately after his birth; he fell in the grips of an influenza epidemic that left him totally frail and unhealthy. Then, the poor boy lost his father at the tender age of nine years. Thereafter, he went to live with his brother in Bangalore. Throughout his childhood, BKS Iyengar experienced one illness or the other, including malaria, tuberculosis and typhoid, along with malnutrition.

When he turned fifteen, he went to Mysore to stay with his eldest sister and her husband, a scholar and a yogi, Sri T. Krishnamacharya. Krishnamacharya used to teach yoga to people in his own school, which was situated in the Palace of the Raja of Mysore. It was in this school that Iyengar learnt the basic asana of Yoga, which led to a considerable improvement in his health. In the year 1937, his Guru asked him to go to Pune and teach yoga there. There, he faced great difficulty because of little knowledge of the English language and lack of schooling.

At the same time, B.K.S. Iyengar has little experience or theoretical knowledge in the field of yoga. Still, he decided to first learn by trial and error and then, practice thoroughly to make himself perfect. This period turned out to be another difficult phase in his life, when he survived on a diet of mostly bread or rice and kept practicing for hours at a stretch. With time, the number of students attending his yoga classes began to increase. However, the monetary compensation was still not too great. In 1943, BKS Iyengar got married to Ramamani.

International Recognition
Slowly and gradually, B.K.S. Iyengar gained recognition as a yoga teacher in the Indian subcontinent. However, international recognition still seemed to be a distant task. It was in 1952, when he met violinist Yehudi Menuhin, that he started moving on the road to international appreciation. Menuhin made arrangements for taking Iyengar to countries like London, Switzerland and Paris, where he was supposed to teach yoga to the people. With this, he came into contact with people belonging to different countries and different walks of life.

The fame of BKS Iyengar started growing day by day and he began writing books on yoga. His first book 'Light on Yoga' was published in the year 1966 and went on to become one of the international bestsellers. The latest book of BKS Iyengar, 'Yoga: The path to Holistic Health' was published in 2001. The guru opened his own institute in Pune, by the name of 'Ramamani Iyengar Memorial Yoga Institute', in the memory of his wife. He still stays and, at times, teaches at the institute.

Presently
BKS Iyengar officially retired from teaching in the year 1984. However, he continues to take medical as well as yoga classes, at special events. At the same time, he is also actively involved in the promotion of yoga throughout the world. These days, classes are being conduced by his daughter Geeta, his son Prashant and other senior teachers.

Iyengar Yoga
Yoga comprises of eight different aspects, namely Yama and Niyama, Asana, Pranayama, Pratyahara, Dharana, Dhyana and Samadhi. Iyengar yoga is a form of yoga, which serves as a way of life to all. It is meant for each and every individual and makes use of props. An individual uses things like wooden gadgets, belts, ropes, etc, to achieve perfection in any asana. Regular practice of 'Iyengar Yoga' leads to an integration of the body, the mind as well as the emotions.

Recognition
The efforts of BKS Iyengar in the filed of Yoga were recognized by the Government of India, which then awarded him with two awards.