Lord Shiva is known as the destroyer of the world. Shiv/Siva is one of the most popular Gods among the Hindu Deities.
Home : Spirituality : Hindu God : Shiva 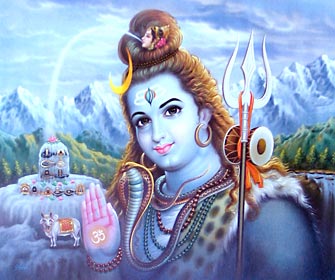 Lord Shiva or Siva is considered as the destroyer of the world. Shiva is one of the most popular gods of the Hindu religion. Lord Siva forms the part of the Trimurti (Trinity), the other being Brahma, the creator and Vishnu, the preserver. Shiva is known for the complexity of his nature, representing contradictory qualities. He is the destroyer and the restorer, the great ascetic and the symbol of sensuality, the kind herdsman of souls and a wrathful avenger.

Lord Shiva- The Role
Lord Shiva represents the vital goodness in the form of Satyam, Shivam, Sundaram i.e.; Truth, Goodness and Beauty .Lord Shiva performs a celestial role of dissolution and recreation of the universe, that's why; he is mostly associated with the words, like destroyer and destruction. The role of Shiva is often confused with these terms and the difficulty arises, when the significance of his celestial role is not understood.

The conception is clear itself by a slight balance between the opposing forces of good and evil. When this balance gets disturbed and continuation of life becomes unfeasible, Lord Shiva dissolves the universe. This is known as '' pralay '' and it is done in order to create another cycle .So that the unliberated souls will get another opportunity to liberate themselves from the bondage of the material world. To put succinctly, Siva protects the souls from pain and suffering that is generated by the unhealthy universe.

Shiva - The Giver
Lord Shiva is known as the ''giver god'', lord of mercy and kindness. He always protects his devotees from evil forces like lust, greed and anger. He is the most kind -hearted God who grants boons and bestows grace to his devotees.

Shiva - The Image
Lord Shiva has the unclad body covered with ashes symbolizing the transcendental aspect of the universe. Siva's three matted locks represent the integration of the mental, physical and spiritual energies. The crescent moon becomes the part of lord's ornament symbolizing the time cycle through which creation evolves from the beginning to the end. The three eyes of Lord Shiva suggest: the Sun is his right eye, the Moon is the left eye and fire, the third eye.

The Snake around his neck symbolizes the yogic power, which he uses to dissolve and recreate the universe. The Rudraksha necklace worn by the lord shows that he uses his celestial powers without compromise,to maintain law and order. The trishula (trident), symbolizes the Lord's three fundamental powers of will (iccha), action (kriya) and knowledge (gyana).The damaru (drum) and its two sides separated from each other symbolizes the two entirely dissimilar states of existence, invisible and evident.

The bull, Nandi is linked with Shiva and it is considered as his vehicle. The bull symbolizes both power and ignorance. Tiger's skin makes Lord Shiva's clothing and his seat, which illustrates the idea that he is the source of potential energy during the dissolution of the universe. Thus, Lord Shiva is well-regarded as the ultimate organizer of the birth and death in the corporeal world.

Shiva - The Lingam
Shiva is worshipped in his invisible and an unborn form, known as the lingam. Lingam is always accompanied by the Yoni, which is the female part, adjoining the base of the lingam. The lingam symbolizes the male creative power of Shiva.

Shiva Chalisa
Shiva Chalisa is a "forty verse" prayer. Verses are recited or chanted by groups. The acts and deeds of Shiva are recalled in these verses to aid the devotee to meditate on virtuous and noble qualities.

Shiva Legends
Shiva is considered as the destroyer of the universe, in Hinduism. Shiva is a complex god, in terms of nature and represents contradictory qualities, being the destroyer and the restorer simultaneously. There are numerous legends surrounding Lord Shiva and his powers. Here're a few popular stories of Lord Shiva.

Names of Shiva
Lord Shiva is considered as the destroyer of the Universe as per the Hindu Mythology. Shiva is one of the most popular gods of the Hindus. Lord Shiva is a complex god like goddess Kali, being destroyer and restorer at the same time. Shiva is also known as Bhole Shankar, the innocent god, who gets appeased easily.