Hanuman Langur is believed to be one of the Old World monkeys, belonging to the Semnopithecus Genus. They comprise of 15 subspecies and are terrestrial in nature. Earlier hanuman langurs were believed to comprise of a single species. However, now they are recognized as seven distinct species. Hanuman langur is also known by the name of Gray Langur, Entellus Langur and Common Indian Langur.

Physical Traits
The fur of the gray langur of India may be gray, dark brown or even golden in color. The face is black and the size varies from one subspecies to another. Male langurs grow to a length of 51 cm to 78 cm and weigh about 18 kg. The female langurs are smaller, with a length of 40 cm to 68 cm and weight of about 11 kg. The length of the tail is between 69 cm and 101 cm.

Connection with Indian Mythology
Gray langur of India is believed to have derived its other name, Hanuman Langur, from the Hindu Monkey-god, Hanuman. It is said that the langurs helped Lord Hanuman in the battle of Lanka. It was during this time that the monkey god got trapped in the fire. This episode resulted in the black face of the langurs, since they got burnt while helping the Lord. Hindus regard the Entellus Langurs of India as sacred and do not assault them at all. 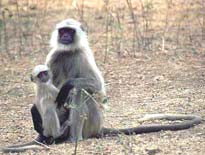 Common Indian langurs survive on a diet comprising of leaves, fruit, buds and flowers. The exact diet, however, changes from season to season. During winters, they survive on a diet of mature leaves. In summer season, they mainly survive on fruits. Insects, tree bark and gum also supplement their diet. Hanuman langurs can easily digest seeds with high levels of the toxins and can eat even soil and stones.

Behavior
Gray langur of India can usually be found living in large groups, dominated by a male langur. The membership of the group may be anywhere between 11 and 60. However, they hold the dominating position for a very short period only, which may stretch upto 18 months. Whenever a new male takes over the group, all the infants of the previous alpha male are killed. Entellus Langurs of India may form bachelor groups also.

Mating Behavior
Female langurs attain maturity at 3 to 4 years of age, while males achieve the same in 4 to 5 years. However, they start mating in the 6th or 7th year only. The gestation period is 190 to 210 days, after which a single infant is born. Only in very rare cases does a female langur give birth to two infants. Where there are a number of males in a group, only the high-ranking males can mate with any female. The other males get a chance to mate only if they manage to sneak by the high-ranking males.