Sundarbans National Park forms a part of the largest delta created by the Ganga and Brahmaputra Rivers. Its core area is made up of the largest mangrove forest in the world. The best time to visit the park comprises of the months of September to May. Spread over an area of approximately 1330 sq km, Sundarbans Wildlife Sanctuary of India has been named after the Sundari trees that are found here in plenty. The northern boundary of the sanctuary is formed by Goasaba, Sandeshkali and Basanti Islands. To the south, lies the never-ending sea.

Outlining the western boundary of Sunderban Tiger Reserve of West Bengal, are Matla and Bidya Rivers. The eastern boundary of the reserve coincides with the international border of Bangladesh. It has been declared as a biosphere reserve, is also one of the World Heritage Sites in India and comes under 'Project Tiger' also. Sunderban National Park of India is made up of a variety of forests, such as the mangrove scrub, littoral forest, salt water mixed forest, brackish water mixed forest, wet forest, wet alluvial grass forest, etc. 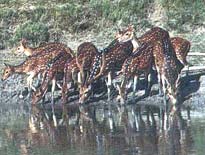 Sundarbans Wildlife Sanctuary of West Bengal comprises of 64 species of plants, in toto. Due to tidal effects, these plants can easily endure estuarine conditions and saline barrage. The months of April and May see the emerald islands of the park being covered with red leaves of the Genwa. Adding more color are the red flowers of Kankara and the yellow blooms of Khalsi. The plants and trees commonly found here include Genwa, Dhundal, Passur, Garjan, Kankra, Sundari and Goran.

How to Reach Sundarbans National Park

By Air: At 112 km, Kolkata airport falls the nearest to Sundarbans
By Rail: The nearest railway station is the one situated at Canning.
By Road: Road transportation is easily available for all the cities falling near Sundarbans.
By Water: Since one can reach the core of Sundarbans only through waterways, motor launch facilities are easily available.