Kanha National Park is one of the most famous habitats of the tiger in the whole world. The park is situated amongst the Banjar and Halon valleys of the state of Madhya Pradesh. The central Kanha Valley was built into a protected area for animals a long time back. However, it was given the status of a wildlife sanctuary in the year 1933 only, which was elevated to that of a national park in 1955. Kanha Wildlife Sanctuary of India spreads over an area of 1945 sq km, out of which the core area comprises of 940 sq km. The altitude of the park ranges from 450 m to 900 m above sea level.

The best time to visit the Kanha Wildlife Park of Madhya Pradesh is between the months of November and January. The park remains closed from 1st November to 30th June and the period may be extended if the monsoon season arrives early. The average rainfall received at Kanha Tiger Reserve of Madhya Pradesh is approximately 1600 mm. The reserve is known for a number of conservation efforts that were carried out here in context of different animals, one of them being related to the Barasingha. 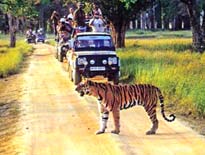 The landscape of the Kanha National Park is made up of massive plateaus, with enormous grasslands, and open pastures. Sulkum, Banjar and Nila Rivers pass through the park, with a number of perpetual springs supplementing them. The central meadows boast of a huge water body, known as Shravantal. The tree species found in the Kanha Tiger Reserve of India include Bija, Haldu, Dhaora, Sal, Ban-rahar, Bamboo and Sindhur.

How to Reach Kanha National Park

By Air: The nearest airport is at the Nagpur city

By Rail: Jabalpur, 169 km away, is the nearest railhead from Kanha

By Road: There are regular buses as well as taxi services from Jabalpur to Kanha