Rajaji National Park is situated in the state of Uttaranchal, now known as Uttarakhand. The picturesque beauty and rich biodiversity of the park serve as its major attractions for both nature lovers as well as wildlife enthusiasts. In the year 1983, Rajaji Wildlife Sanctuary of Uttaranchal was merged with Motichur and Chilla wildlife sanctuaries and made into Rajaji National Park. The park has been named after Late Sri C. Rajgopalachari (also known as Rajaji), a famous freedom fighter. Rajaji National Park of India spreads over an area of 820.42 sq km and is open to visitors only from Mid-November to Mid-June.

Flora
Rajaji Wildlife Sanctuary of India is nestled between the Shivalik ranges and the Indo-Gangetic plains. This has resulted in the sanctuary being blessed with distinctive vegetation, representing several distinct zones and forest types. One can find everything, right from riverine, broad-leaf mixed forests, Chirpine forests, scrubland and grassy pasturelands, in this sanctuary. 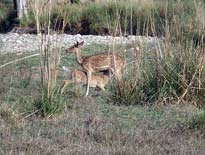 The major attractions of the Rajaji National Park comprise of the ferocious tigers and the majestic elephants. Watching both the animals in their natural habitat is a pleasure in itself. The other wildlife attractions include Leopard, Wild Boar, Barking Deer, Sambar, Chital, Sloth Bear, Himalayan Yellow-throated Marten, Civet, Jungle Cat, Langur, etc.

Reptiles
Reptiles seen at the park comprise of Monitor Lizard, along with King Cobra, Python and a number of other snakes.

Bird Species
One can get to watch as many as 315 species of birds at the Rajaji Wildlife Sanctuary. These include Warbler, Indian Roller, Parakeets, Hornbill, Jungle Fowl, Pea Fowl, Barbet, Kingfishers, Oriole, Kaleej Pheasant, Woodpecker, Finch, Thrushes and so on. Winter season sees a large number of migratory birds visiting the sanctuary.

Fish
Ganga and Song rivers, flowing through the park, are home to a wide variety of fish, like Goonch, Trout, Kalabanse, Mahaseer and Chilwa.

How to Reach Rajaji National Park

By Air: The nearest airport is in Dehradun.

By Rail: The railway stations nearest to Rajaji are at Haridwar and Rishikesh.

By Road: Rajaji National Park is well connected with almost all the key cities of India by road.