Gir National Park, established in the Junagarh district of Gujarat, is spread over an area of 1412 sq km. The park holds the distinction of being the only natural habitat of Asiatic Lions in the entire world. The population of the Asiatic lions in Gir is estimated to be somewhere around 300. Gir Wildlife Sanctuary of India is also home to a race of cattle herders, known as the Maldharis. The sanctuary has Tulsi Shyam and Kankai Mata sulphur springs inside its premises, along with a number of Hindu worship places. The best time to visit the Gir Wildlife Park of Gujarat is during the period of mid-October to mid-June.

Fauna
The topography of Gir National Park of India is formed of low hills, covered with mixed deciduous trees like Teak, Acacia, Jamun, Tendu and Dhak. Dotting the landscape are large patches of grasslands. The area along the main rivers and streams of the park boasts of a distinctive stretch of vegetation. The species found there include Jambu, Karanj, Umro, Vad, Kalam, Charal, Sirus and Amli trees. The coastal borders of Gir Wildlife Park were planted with Prosopis and Casuarinas as part of the afforestation plan carried out there. 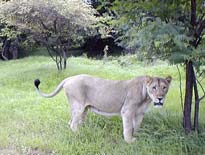 Gir Wildlife Sanctuary of Gujarat serves as the only abode of the Asiatic lions in the whole world. It is the only place where you can find the majestic animals in their natural habitat. The best time to sight an Asiatic Lion is dawn or dusk, when they are freely roaming in the jungle. Gir Wildlife Park of Gujarat is also quite renowned for housing a significant population of leopards, which is presently estimated to be around 210.

Bird Species
As many as 300 species of birds can be found inhabiting the forests of the Gir Wildlife Park, situated in the state of Gujarat. The wide variety of birds offered by the park makes it a heaven for bird watchers. The most commonly found species include Bush Quail, Paradise Flycatcher, Painted Sandgrouse, Pied Woodpecker, Creset Serpent Eagle, Black Headed Cuckoo Shrike, Bonelli's Eagle and Grey Patridge.

How to Reach Gir National Park

By Air: The nearest airport is situated at Keshod, at a distance of 86 km.

By Rail: Sasan railway station, situated one km away, is the nearest to Gir.

By Road: Taxis as well as buses are easily available from Junagarh.