Ranthambore National Park forms a part of the Sawai Madhopur District of Rajasthan. The park is nestled on the intersection of the Aravalli hill range and the Vindhya hill range. Ranthambore gained recognition as a wildlife sanctuary in the year 1957 and came under the 'Project Tiger' in 1974. However, it was only in 1981 that the sanctuary got elevated to the status of a national park. Ranthambore Wildlife Sanctuary of Rajasthan once served as the hunting preserve of the Maharajas of Jaipur.

It is spread over an area of 400 sq km, which goes upto 500 sq km when the area of Sawai Man Singh Sanctuary is also included in it. The sanctuary remains open from October to June every year. Bounded by Chambal River in the south and Banas River in the north, Ranthambhore Tiger Reserve of India comprises of six manmade lakes, which serve as the major source of water for the animals as well as the birds. 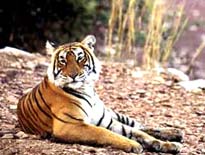 Dotting the landscape of the Ranthambhore Wildlife Sanctuary of India are numerous water bodies. Colossal rock formations, sharp scarps, perpetual lakes and streams and forests form the topography of the sanctuary. The vegetation, comprising of more than 300 species of trees, is mainly of the dry deciduous type. Banyan, Pipal and Dhok trees, along with, clusters of mango trees, form a major portion of the tree cover. The terrain keeps varying between impenetrable forests and open bush land.

Bird Species
Ranthambore Wildlife Sanctuary is home to approximately 272 species of birds, both resident as well as migratory.

How to Reach Ranthambore National Park

By Air: The nearest airports fall in the city of Jaipur and Kota.

By Rail: Sawai Madhopur railway station is the closest to Ranthambore.

By Road: Buses as well as taxis regularly ply between Ranthambore and Sawai Madhopur.