Keoladeo Ghana National Park, situated in the Bharatpur city of Rajasthan, is one of the major attractions of India. There is an interesting story behind the establishment of this park. Maharaja of Bharatpur got an earthen dam, known as the Ajan Dam, constructed in 1760 and the depression created by it was converted into the Bharatpur Lake. The lake was then divided into numerous portions and a system of small dams, dykes, sluice gates, etc, was created. This system became, first, the hunting preserve of the Maharaja and later, the Keoladeo Ghana Wildlife Sanctuary of India.

The sanctuary was given the status of a national park on 10th March 1982. In December 1985, UNESCO declared it as a World Heritage Site. Presently, Keoladeo Ghana Bird Sanctuary of Rajasthan, spread over an area of 29 sq km, claims the distinction of being one of the chief breeding and feeding grounds for the birds in the world. The best time to visit the sanctuary is from August to November, for watching resident breeding birds and from October to February, for watching migrant birds. 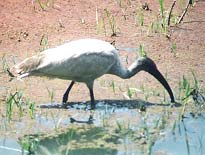 A major portion of the landscape of Keoladeo Ghana National Park is comprised of scrublands and grasslands. One can also find marshes in a significant area of the park. Then, there is wide plantation of acacias, which was done under an afforestation program.

By Air: The nearest airport is situated in the city of Agra.

By Rail: Bharatpur railway station is regularly serviced by trains.

By Road: Bharatpur is well linked to almost all the key cities of India, by road.