Periyar National Park lies nestled in the Western Ghats, falling in the Idukki district of Kerala. The lake that constitutes a major portion of the park came into existence after a dam was constructed on the Periyar River in the year 1895. The reservoir, measuring 55 sq km in area, led to the immersion of some of the prime forest area. At the same time, it resulted in the establishment of the Periyar Wildlife Sanctuary of Kerala. The beauty of the sanctuary is at its best in winters, however one can have better animal sightings in summers.

Periyar Wildlife Park of Kerala is one of the protected areas covered under the 'Project Tiger'. The park has a significant population of tigers. However, the terrain of the area is such that it is difficult to get a glimpse of the majestic animal. Periyar National Park of India stretches over an area of 777 sq km (core area being 350 sq km) and remains open to the visitors only between the months of October and April. The altitude of the park varies from 914 to 1830 m above the sea level. Even today, a number of tribal sects, namely Manans and Ooralis, live inside the premises of Periyar Tiger Reserve of India. 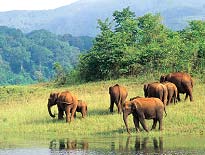 Western Ghat Hills, constituting a major portion of the park, are thickly wooded and stand dotted with water bodies, huge grasslands and a thick forest cover. A number of deeper valleys inside Periyar National Park of Kerala contain tropical evergreen forests, which are full of wild vegetation. Some of the level areas forming the park comprise of marshy grasslands near the edges of the lake and other water bodies. Apart from Periyar River, the water needs of the Periyar Wildlife Park of India are met by Azhutha and Mullayar Rivers. There are also patches of semi-evergreen forest across the boundaries of the park.

How to Reach Periyar National Park

By Air: Kottayam and Madurai airports are the nearest to Periyar.

By Rail: You can easily catch a train from Kottayam and Madurai railway stations.

By Road: Buses and taxis are easily available from Periyar to Kottayam and Madurai.