Wayanad Wildlife Sanctuary is situated in the South-Indian state of Kerala. It is also known as the Muthanga Wildlife Sanctuary and was set up in the year 1973. Later, the sanctuary was declared as a national park. Wayand National Park of India is spread over an area of 344 sq km and forms a part of the Wayanad Plateau. It occupies area in two districts of Kerala. The northern part of the Wayand National Park falls under Cannanore district, while the southern area comes under Calicut district.

The term 'Wayanad' literally means the 'land of swamps'. Wayand Wildlife Sanctuary of Kerala forms a part of the Nilgiri Biosphere Reserve. The sanctuary was set up with the aim of inventing scientific conservation methods, which will be in harmony with the traditional lifestyle of the tribals living in this region. The best time to visit Wayand National Park of India comprises of the months of June to October. 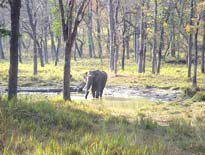 Reptiles
Monitor lizards and a variety of snakes can be seen inhabiting the Wayand National Park.

How to Reach Wayanad Wildlife Sanctuary

By Air : The nearest airport is at Calicut.
By Rail : A good network of railways connects Wayanad with the other parts of India.
By Road : There are frequent buses as well as taxis to and from Calicut.