Sultanpur National Park falls under the Gurgaon district of Haryana. It is situated on the Gurgaon-Farukh Nagar Road, at a distance of approximately 50 km from Delhi and 15 km from Gurgaon. The park, spread over an area of 143 sq km, was declared a bird sanctuary in the year 1971. The upgradation of Sultanpur Bird Sanctuary of India to the level of a national park took place in 1991. There is a small museum as well as a library inside the sanctuary, where you can easily get information on both resident and migratory birds.

The best time to visit the Sultanpur National Park of India is during the months of October to June, when it is visited by a large number of migratory birds. There are four watchtowers and a number of hideouts inside the park, from where one can have great views of the entire park. The boating facility inside the premises of Sultanpur Bird Sanctuary of Haryana is also quite popular. 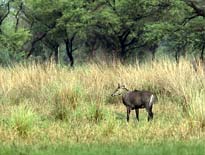 Sultanpur National Park of India is covered with tropical and dry deciduous forests, comprising mainly of babul savannah grasses, acacia, jamun and banyans. The fertile grounds are covered with lawns, trees, shrubs and heaps of bougainvilleas.

How to Reach Sultanpur National Park

By Air: Delhi international airport is the nearest to Sultanpur.
By Rail: The nearest railway station falls in Delhi.
By Road: Buses and taxis are easily available from Delhi and Gurgaon.