Nagarhole National Park is situated at a distance of approximately 96 km from the Mysore city of Karnataka. Sharing its boundary with Bandipur National Park, the park covers an area of approximately 643 km. Kabini River flows alongside Nagarhole Tiger Reserve of Karnataka. The dam and the reservoir of Kabini River act as a kind of a natural boundary between Bandipur Wildlife Sanctuary and Nagarhole Wildlife Sanctuary of India. The other rivers that flow through the sanctuary are those of Lakshmana, Teentha and Nagarhole.

Nagarhole Wildlife Park of Karnataka serves as home to some of the most endangered wildlife species. The term 'Nagarhole' is a combination of two Kannad terms, 'Naga' meaning 'snake' and 'Hole' meaning 'streams'. This sanctuary has been so named because of the numerous streams that pass through its rich tropical forests, like a snake. Nagarhole Wildlife Sanctuary of Karnataka was set up in the year 1955 and in 1974; it was extended to include the Mysore forests within its boundaries. 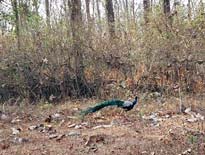 Nagarhole National Park, being a high rainfall region, is home to a large number of open grassy swamps. Almost the entire landscape of the park is covered with dry as well as the moist deciduous forests. The trees found here mainly include Teak and Eucalyptus.

How to Reach Nagarhole National Park

By Air: The airports nearest to Nagarhole are at Mysore and Bangalore.

By Rail: Mysore railway station falls the nearest to Nagarhole

By Road: Nagarhole is well connected by road with the cities of Madikeri, Mysore and Bangalore.