Bandipur National Park is situated on the Mysore-Ooty Highway, at the confluence of Deccan Plateau and Western Ghat Mountains. The wildlife park falls under the Chamarajanagar district of the South-Indian state of Karnataka. Bandipur Wildlife Sanctuary is one of the first sanctuaries in India to be devoted to 'Project Tiger'. It was established in the 1930s and was declared as a tiger reserve in the year 1973. In 1974, the sanctuary was elevated to the status of a national park.

Bandipur National Park of Karnataka enjoys a pleasant climate and has diverse geographical features. These features have helped it support a wide variety of flora and fauna. The best way to enjoy the amazing flora and fauna of Bandipur is on the back of an elephant. You can even try night vigil in a watchtower or machan, which will provide you with a clear view of the jungle. The facilities provided inside the park include boating and angling. 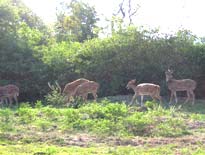 The flora ranges from dry and tropical deciduous and evergreen forests to open grassy woodlands. The eastern boundary of the Bandipur Tiger Reserve of India is composed of stunted trees, sprinkled with bushes and open grassy patches. To the northwest of the park are forests, ranging from dry deciduous ones to tropical mixed deciduous ones. One can also come across precious hardwoods, like rosewood and teak, while roaming in the jungles.

Wildlife
One of the major wildlife attractions of the Bandipur National Park comprises of its significant population of Asiatic Elephants. The best time to spot this regal animal is during the wet season. If lucky, you may also spot a tiger while on a tour of the sanctuary. Other animals that can be seen include Gaur (a type of bull), Sambhar, Chital, Mouse Deer, Four-Horned Antelope, Barking Deer, Sloth Bear, Panther, Malabar Squirrel, Red-Giant Squirrel, Porcupines, Black-naped Hare, etc.

How to Reach Bandipur National Park

By Air: The nearest airport is situated at Bangalore and is 220 km from Bandipur.

By Rail: The nearest railhead of Mysore is situated at a distance of 80 km.

By Road: Bandipur is situated nearly 220 km from Bangalore, 80 km from Mysore and 80 km from Ooty.