Sariska National Park lies nestled in the Aravali Hill ranges of Rajasthan. One of the most popular national parks of India, Sariska falls under the Alwar district. Once the hunting reserve of the royal family of Alwar, Sariska was declared as a wildlife sanctuary in the year 1958. In the year 1979, it came under the 'Project Tiger' and was declared as a tiger reserve as well as a national park. Sariska Wildlife Sanctuary of India is established over an area of 800 sq km, out of which 480 sq km makes up the core area.

The sanctuary remains open throughout the year and the only restrictions laid on visit are during the off-season period. During this period also, only the entry into the jungle routes is regulated. However, the main road remains open the year round. The best time to visit Sariska Tiger Reserve of Rajasthan is during the months of November to June. 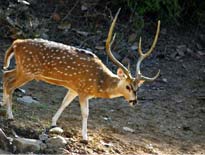 Rising and falling hills dominate the landscape of Sariska Wildlife Sanctuary of India. The small lake, lying to the left of the main road, dries up in summers. The trees present in the sanctuary are mostly of the dry deciduous type, such as Dhok, Khair, Tendu, Ber, Surwal and Goria. The landscape of Sariska National Park of India changes to quite an extent as the season changes.

Wildlife
Sariska Tiger Reserve of India serves as the natural habitat to a large population of wild animals. The most popular amongst them are Tigers, Leopards, Wild Boars, Hyenas, Wild Dogs, Jungle Cats, Jackals, Sambar, Chital, Nilgai, Chausingha and Langurs. The sanctuary is also renowned for housing significant population of Rhesus Monkeys.

How to Reach Sariska National Park

By Air: The nearest airport is located at Jaipur, around 110 km away.
By Rail: The nearest railway station from the park is situated at Alwar.
By Road: Sariska is well connected with Alwar by road.