It was from Corbett Wildlife Sanctuary that the ambitious tiger conservation program of India, known as 'Project Tiger', was launched. The park was given the status of a tiger reserve in 1973. Once popular as a British hunting ground, Jim Corbet Tiger Reserve of India is now a renowned protected area for the endangered population of tigers. It is spread over an area of 1200 sq km, out of which 520.82 sq km makes up the core area. The best time to visit the park is the period of Mid-November to Mid-June. 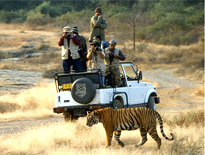 Hilly areas, temporary marshy depressions, plateaus and ravines make up the topography of Jim Corbett National Park. The rich fauna of the park comprises of 110 tree species, 51 species of shrubs, and more than 33 species of bamboo and grass. A major portion of the lower area of the Jim Corbett Wildlife Sanctuary is covered with Sal trees. The middle reaches stand adorned with Shisham and khair trees, while on the upper reaches, one can find bakli, chir, gurail and bamboo trees.

Wildlife
People from all over the country come to Jim Corbett National Park to see the Royal Bengal tiger in its full glory. The other animals that can be seen here include Elephants, Deer, Leopards, Jungle Cat, Fishing Cat, Wild Dog, Himalayan Palm Civet, Indian Gray Mongoose, Common Otter, Black-naped Hare, Porcupine, Langur Rhesus Monkeys, etc. The lower regions of the park are the best for sighting Sloth Bear, while in the upper regions; you can hope to come across Himalayan Black Bear. The Ramganga River shore is the place to spot Gharials and Mugger Crocodiles.

Bird Species
Jim Corbet Tiger Reserve of India serves as home to as many as 580 species of birds. Parakeets, Flycatchers, Babblers, Cuckoos, Robins, Bulbuls, Indian Pied Hornbills, Great Pied Hornbills, Warblers, Finches, etc can be seen inhabiting the park, along with a number of migratory birds.

How to Reach Corbett National Park

By Air: The nearest airport is at Phoolbagh, Pantnagar. It is situated at a distance of around 50 km from Corbett National Park

By Rail: The railway station of Ramnagar falls the nearest to Jim Corbett

By Road: Jim Corbett National Park is well connected with the major cities of India, by road.