Dudhwa National Park falls under the Lakhimpur-Kheri district of Uttar Pradesh (UP). It is situated along the India-Nepal border, in the foothills of the Himalayas. Spread over an area of 490 sq km, the park stands bounded by Indo-Nepal border in north and by Suheli River in the south. Dudhwa Wildlife Sanctuary of India dates back to the year 1958. In 1977, the sanctuary or reserve was elevated to the status of a national park. Dudhwa Wildlife Park came under 'Project Tiger' in the year 1988. At that point of time, Kishanpur Sanctuary was also added to the national park and Dudhwa Tiger Reserve of Uttar Pradesh came into existence. The best time to visit the sanctuary is between November and May.

Flora
The landscape of the Dudhwa National Park comprises of thick sal forests, grasslands and wet marshes. The wetlands of the park seem to be characterized by tall crude grass, muddy depressions and lakes. Termite mounds and patches of reverie trees make up a major portion of the reminiscent forests of the Dudhwa Wildlife Sanctuary. 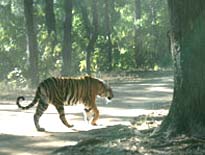 One can hope to find some of the most rare species of animals at Dudhwa Wildlife Park of Uttar Pradesh. One of them is Hispid Hare, a dark brown animal earlier thought to have become extinct, but rediscovered in 1984. The other animals to be seen here include Swamp Deer, Sambar Deer, Tiger, Rhinoceros, Sloth Bear, Ratel, Barking Deer, Jackal, Jungle Cat, Leopard Cat, Spotted Deer, Hog Deer, Civet, Fishing Cat, etc.

How to Reach Dudhwa National Park

By Air: The nearest airport falls in the city of Lucknow.

By Rail: Bareilli railway station is the nearest junction from Dudhwa.

By Road: Dudhwa National Park is well connected by road with almost all the major cities of the country.