Bharatpur Bird Sanctuary is situated in the desert state of Rajasthan. It is one of the most famous wildlife sanctuaries in India and is like a heaven for bird lovers. Bharatpur Wildlife Sanctuary is also the only sanctuary of India that was created artificially. Maharaja of Bharatpur got an artificial lake and dam constructed to store the water brought by the annual floods in this area. This dam gradually turned into an ecosystem, where the maharaja started coming for hunting. In the year 1982, this hunting preserve was awarded the status of a national park.

Bharatpur Bird Sanctuary was declared as a World Heritage Site by UNESCO in 1985. The national park serves as home to over 300 species of birds, both resident and migratory. One can also find a number of wild animals inhabiting the park. Bharatpur bird sanctuary is also known by the name of Keoladeo Ghana National Park, after the Lord Shiva temple situated inside its premises. The best time to visit the park is from August to November (for watching resident birds) and October to February (for watching migratory birds). 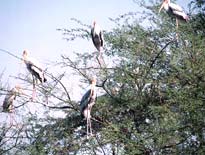 The terrain of the Bharatpur National Park is made up of scrubland and grassland, along with marshes. One can also find large-scale cultivation of acacias inside the park, which was carried out under an afforestation program.

Other Attractions at Bharatpur
How to Reach Bharatpur Bird Sanctuary

By Air: Agra airport falls the nearest to Bharatpur

By Rail: Bharatpur railway station is well linked to almost all the key cities of India.

By Road: There is a good road network connecting Bharatpur with the other parts of the country.