The Yoga Institute of Mumbai/Bombay is one of the oldest organized centers of Yoga in India as well as the world.
Home : Spirituality : Ashrams in India : Yoga Institute Mumbai 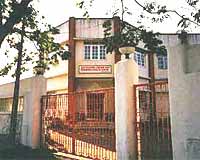 Shri Yogendraji
Shri Yogendraji met his Guru, Shri Paramahamsa Madhavdasaji, during his college life. From that moment onwards, he became a firm believer in Yoga. He received education in Yoga at Paramahamsa Madhavadasaji's ashram in Malsar, Gujarat. On the completion of his education, he left the ashram to spread the knowledge throughout the world. Thus began his first step towards the establishment of the Yoga Institute in Bombay city of India.

Health camps
Regular health camps are organized at The Yoga Institute of Mumbai. These residential camps stretch over seven days and are quite renowned. Two-days camps are also organized here.

Teacher Training Programs
Those individuals who have completed the seven-days yoga camps organized by the institute can apply for Yoga Teachers Training course of 7 months (in English) and one year (in Hindi).

How to Reach Yoga Institute of Mumbai

By Rail
The main railway station of Mumbai is the Chattrapati Shivaji Terminus (CST). It is connected with all the key cities in India.

By Road
An extensive network of roads and state highways link Mumbai with the rest of the country.