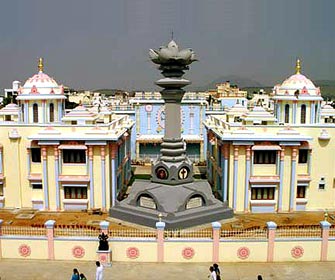 Sathya Sai Baba
Sri Sathya Sai Baba is one of the most revered spiritual leaders of the 20th century. He has propagated the message of looking towards God and moving on the path of spirituality throughout the world. He has never intended to start a religion and nor does He recommend His followers to adopt a particular religion. From a young age of 14, Shri Satya Sai Baba has been working towards the goal of serving others and guiding them in the right direction.

He has been walking on this path for more than 50 years, with the highest ideals of truth, right conduct, peace, love, and non-violence. People from far off places come to the Sri Sathya Sai Baba Ashram at Puttaparthi, known as Prasanthi Nilayam. Baba interacts with all His followers on a personal level, without any intermediary in between.

Prasanthi Nilayam Puttaparthy
The main ashram of Shri Sathya Sai Baba is at Puttaparthy and it is known as Prasanthi Nilayam, meaning "abode of the highest peace". Sathya Sai Baba inaugurated the ashram on November 23, 1950, His 25th birthday. The ashram complex consists of beautiful temples, a kalpavriksha (wish-fulfilling tree) a meditation tree and a Darshan hall, where Sathya Sai Baba meets his devotees. There is also a post office, a public relations desk, a canteen and even a bakery within. Just a village a few years back, Puttaparthi has progressed to a developed town.

Brindavan
The Brindavan Ashram of Shri Satya Sai Baba is situated in Whitefield, on the outskirts of Bangalore.

Kodai Kanal
The third ashram of Sri Sathya Sai Baba is at Kodai Kanal, a beautiful hill station in India.

Message of Sri Sathya Sai Baba
Satya Sai Baba encourages people to look inside themselves and recognize who exactly they are. An individual is not the mind, not the mind; he is the eternal spirit that temporarily occupies the mind and the body. He preaches people to have unquestionable faith in God and follow their own conscience with courage and resolve. This is what spirituality is all about and this is what will bring unity and peace. The main motto of Baba has been "Love All, Serve All".

Teachings of Shri Satya Sai Baba
Through His writing as well as His discourses, Satya Sai Baba has created a wide pool of knowledge and guidance. The main teachings of Baba have been summarized below…
How to Reach Sri Sathya Sai Baba Ashram, Puttaparthi

By Air
There is an airport at Puttaparthi. One can also go to Bangalore airport, with direct flights to almost all the major cities in India.

By Rail
The railway station at Puttaparthi has regular train services to Bangalore.

By Road
There are frequent buses as well as taxi services between Puttaparthy and Bangalore.