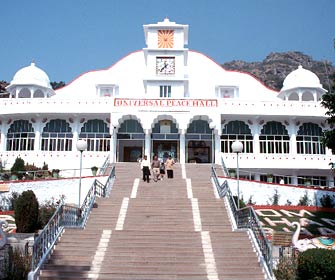 Brahma Kumaris World Spiritual University (BKWSU)
Brahma Kumaris World Spiritual University is a monastic community, founded in India. It teaches Raja Yoga, a form of meditation, which emphasizes on the development of mental abilities to learn the true meaning of life and achieve salvation. One of the unique features of the movement is that it is headed by females only. This is one of the main reasons why it is known as Brahma Kumaris.

Establishment of Brahma Kumaris World Spiritual University
Brahma Kumaris World Spiritual University was founded in the year 1937, in the undivided India. The state of Hyderabad, which was under Sindh at that time, was the place of its establishment. It is said that Lekhraj Kripalani, also known as Dada Kripalani, had a divine vision of God Vishnu. After this incident, he sold off his business and started holding religious gathering. The movement slowly gained pace and became the Prajapita Brahma Kumaris Ishwariya Vishwa Vidyalaya, which we know of today.

Expansion of Brahma Kumaris
By the early 1950s, Brahma Kumaris started expanding itself throughout the country. From the initial 300 individuals, belonging to a single community, and one country, it has expanded to over 800,000 students in almost 8,500 Raja Yoga centers in 90 countries. The headquarters of the BKWSU, known as Madhuban, is in Mount Abu, Rajasthan.

Lekhraj Kripalani
Lekhraj Kripalani, the founder of Prajapita Brahma Kumaris Ishwariya Vishwa Vidyalaya, was born in 1876 in Hyderabad, Sindh. He was leading the life of a diamond merchant till he had the fortuity of receiving a vision from Lord Vishnu Himself. From that day onwards, his life changed entirely and he laid the foundation of a new world order, based on peace and brotherhood.

Dadi Prakashmani
The heads of Brahma Kumaris are fondly referred to as Dadis (grandmothers). The current head of the organization is Dadi Prakashmani. She is also the president of the Raj Yoga Education and Research Foundation and the managing trustee of the World Renewal Spiritual Trust.

Beliefs of Brahma Kumaris
The beliefs of the Brahma Kumaris include…
Philosophy of Brahma Kumaris
Prajapita Brahma Kumaris Ishwariya Vishwa Vidyalaya lays emphasis on value-based education, with the qualities of universal brotherhood and co-operation embedded within. Keeping this aim in mind, it has established two other institutions, known as Raja Yoga Education and Research Foundation and Brahma Kumaris Academy. For the development of human potential, the art of right living is taught here.

The Course
The course at the university is inclined towards spirituality. Instead of the usual books and lectures, a combination of satsang (spiritual discourses) and Raja Yoga meditation classes is used.

Madhuban Retreat, Mount Abu
The scenic as well as soothing environs of the Madhuban Retreat will totally mesmerize you. Situated in the lone hill station of Rajasthan, Mount Abu, Madhuban campus is like the Mecca of Brahma Kumaris World Spiritual University. The entire campus comprises of…
How to Reach Madhuban Retreat

By Air
The airport nearest to Mount Abu is the one at Udaipur, approximately 185 km away.

By Rail
The Abu Road station of Mount Abu is well connected to almost all the major cities in India.

By Road
A good network of roads connects Mount Abu with the main cities in Rajasthan as well as the rest of the country.