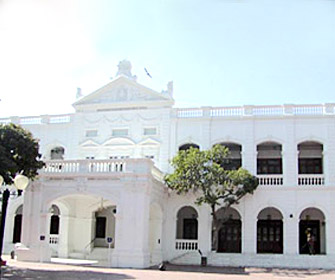 Sadhu T. L. Vaswani
The founder of the Sadhu Vaswani Mission in India, Sadhu T. L. Vaswani was born on November 25, 1879 in Hyderabad, Sindh. He started his career as a professor in Metropolitan College (now Vidyasagar College) of Calcutta. He joined the freedom struggle, along with Mahatma Gandhi and during that period, he made considerable contribution to literature. After independence, he withdrew from active politics and devoted himself entirely to the field of education.

The Philosophy
As per Sadhu Vaswani, religion was nothing but serving God, through the service of the poor and needy. He believed that God resides in each and every individual and when we serve the deprived, we serve God. God cannot be found in isolation or in temples and churches. In his own words…
"You will meet Him in the sweat and struggle of life, in the tears and tragedies of the poor. Not in decorated temples, but in broken cottages is the Great God, - wiping the tears of the poor and singing His new Gita for the New Age!"

By Air
Pune airport is situated about 12-km from the main city. There are direct flights from Pune to most of the major cities in India.

By Rail
Pune has excellent train services, connecting it with all key cities.

By Road
An extensive network of roads link Pune with the rest of the country. There are daily bus services between Pune and Mumbai.