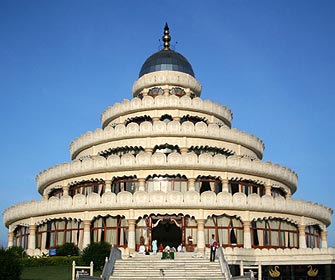 What is the Art of Living?
Art of living is all about leading a normal and enjoyable life, amidst all the tensions and stresses that inundate living today. It is more of a technique through which we learn to eliminate strains and worries and increase happiness and joy in our life. The concept of art of living has become so popular that it is being adopted at the corporate level also. Organizations are using it to help their executives in dealing with high levels of stress.

Sri Sri Ravi Shankar
As far as appearances go, Sri Sri Ravishankar comes across as a tiny little man with flowing hair and beard. But, it is his soothing voice and the power of his words that keep people glued to their seat throughout his discourses. He speaks very softly, eulogizing the virtues of love and brotherhood. He embraces all the people who come to attend his discourses. After attending the art of living sessions by Ravishankar, you will feel more at peace with yourself.
Also known by the name of Gurudev, Sri Sri Ravi Shankar has been walking on the path of a spiritual guide and a teacher since a long time. Right from childhood, he was involved with scriptures and religious environment. He has served the Transcendental Meditation Guru and mystic, Maharishi Maheshyogi, as a senior and trusted lieutenant. The credit of spreading Maharishi's gospel in South Africa as well as the rest of world goes mainly to Sri Sri Ravishankar.

The Technique of the Art of Living
The main technique behind the art of living concept is the Sudarshan Kriya. The basic course is based on this Kriya only and the other courses also derive from it. As per this technique, the main reason behind lethargy, inefficiency, ill health and sickness are the toxins, which accumulate in our system at a cellular level. Sudarshan Kriya aims at removing the toxins from the body, by oxygenating and revitalizing these cells. This leads to a balance in the physical, emotional and mental states and brings satisfaction in life.

The Courses
These courses are held all over the world and are open for each and every one. The fee that is charged for these courses varies from place to place.

Art of Living Foundation in Bangalore, India
The center situated in Bangalore is considered to be the Mecca of the Art of Living Foundation. It is the headquarters of the foundation and lies in the outskirts of the city, on the Kanakapura Road. The official name of the center in Bangalore is 'Ved Vignan Mahavidya Peeth Bangalore International Center'. Perched on a small hillock, it spreads over a large area. The entire complex comprises of offices, snack shop, dining hall, residential quarters, library, prayer hall, lawns, a lotus-shaped tower and a school.

How to Reach Art of Living Foundation, Bangalore

By Air
Bangalore airport has direct flights to all the major cities in the country.

By Rail
Bangalore railway station has regular train services, linking it with the key cities in India.

By Road
Bangalore is covered by an extensive network of roads.