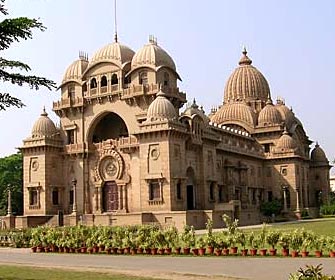 Motto of Ramakrishna Math & Mission "
Atmano mokshartham jagad hitaya cha." It means, 'for one's own liberation, and for the welfare of the world'. The math as well as the mission has been founded to help people in attaining salvation themselves as well as in serving others.

Philosophy of the Ramakrishna Mission
Ramakrishna Mission is based on the philosophy of Sri Ramakrishna Paramhansa. As per this philosophy, the main aim in the life of an individual is the upliftment of himself as well as others. Each human being is gifted with enormous moral and spiritual potential. The only thing he has to do is work towards the discovery and development of that potential. The mission does not believe in the superiority of a particular religion, nor does it prescribe the necessity of shastras (religious texts) and anushthana (rites and rituals).

Sri Ramakrishna
Sri Ramakrishna was born on 18 February 1836 in the Kamarpukur village, near Kolkata. He never gave public discourses or wrote his teachings. He believed that the goal of life is the attainment of the Ultimate Reality, for which an individual must have purity of mind. He preached that God is present in every individual and therefore, serving needy people is like serving God Himself.

By Road
You can reach Belur by buses, mini buses and taxis that are available from various parts of Kolkata.