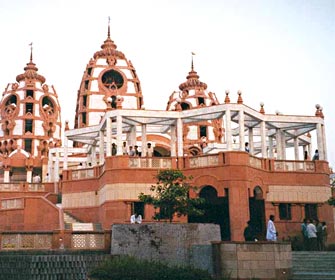 What is Iskcon?
Iskcon is the short form for International Society for Krishna Consciousness. It is basically a nonsectarian and monotheistic movement, which centers on Lord Krishna. The main purpose behind the foundation of Iskcon is to teach people the science of Krishna consciousness, as given in Bhagavad-Gita and other age-old scriptures. This is being achieved, mainly, through the establishment of a Hare Krishna Iskcon Temple, in various parts of India as well as the world.

Establishment of ISKCON
His Divine Grace, A.C. Bhaktivedanta Swami Prabhupada (Srila Prabhupada), founded the International Society for Krishna Consciousness (ISKCON) in the year 1966. It belongs to the Gaudiya Vaisnava tradition, a devotional tradition based on the teachings of Bhagavad-Gita and Srimad-Bhagavatam.

Mission Statement of Iskcon
The mission statement of International Society for Krishna Consciousness consists of the following points…
Expansion of ISKCON
Since the time of its establishment, the ISKCON movement has expanded to a great extent. Today, the movement has extended its membership to 10,000 temple devotees and 250,000 congregational devotees. It also boasts of setting up more than 350 Hare Krishna Iskcon temples, 60 rural communities, 50 schools and 60 restaurants, throughout the world. One can find an Iskcon temple in most of the countries of the world.

Back to Godhead:
It is a magazine, devoted to the Hare Krishna movement.

The Bhaktivedanta Archives
The archives are being prepared to preserve and maintain the teachings and personal life of Srila Prabhupada.

Children of Krishna
This project has been started to promote the educational, economic, emotional, and spiritual development of the children of the Hare Krishna movement.

ISKCON Deity Worship Ministry
The ministry has been set up to encourage deity worship.

Iskcon Prison Ministry It has been set up to teach Krishna consciousness to inmates and guide them towards the path of spiritual development.

Bhaktivedanta Library Services
This project aims at wide distribution as well as promotion of Srila Prabhupada's books and other audio and visual materials.

Vrindavan Institute for Higher Education (VIHE)
VIHE has been established to promote the study of Srila Prabhupada's literature.

Vrindavan Institute for Higher Education (VIHE)
VIHE, devoted to the Iskcon movement, is situated in the holy city of Vrindavan, India. It was established in the year 1987 and aims at promoting Krishna Consciousness amongst the masses. The courses taught at VIHE emphasize on the main books of Srila Prabhupada's - 'Bhagavad-Gita: As It Is', 'Srimad-Bhagavatam', 'Chaitanya-Charitamrta', 'Nectar of Devotion', 'Nectar of Instruction' and Sri Isopanisad.