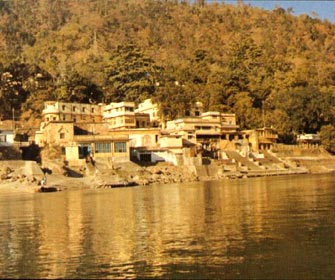 Swami Sivananda
Swami Sivananda Saraswati was born as Kuppuswamy in Tamil Nadu on Sep 8, 1887. In the year 1924, he met his guru, Swami Vishwananda Saraswati, who initiated him into the Sanyas order. Thereafter, he settled in the holy city of Rishikesh and engrossed himself in intense spiritual practices. He became one of the greatest spiritual leaders of India and promoted the art of Yoga as well as the Vedanta throughout the world. Apart from being the founder of Swami Sivananda Ashram in Rishikesh, he was also the founder of Divine Life Society. He left for the holy abode on July 14, 1963.

List of Sivananda Yoga Vedanta Center in India
Swami Sivanada Ashram, Rishikesh
Sivananda Ashram at Rishikesh is the headquarters of the Divine Life Society, a worldwide organization. Swami Sivananda founded the ashram in the year 1932. Initially a small structure, Sivananda Ashram has now evolved into a huge complex with a number of halls, a temple and Gurudev's Kutir. Any person inclined towards spirituality can join this ashram and spend his life in the service of others.

Sivananda Yoga
The form of yoga taught at Shiva Nanda yoga centers and ashrams is known as Sivananda Yoga. A type of Hatha Yoga, it emphasizes on proper breathing (pranayama), exercise (asanas), relaxation (savasana), diet (vegetarian) and positive thinking and meditation (vedanta and dhyana). The teachers at these yoga centers are graduates of the internationally recognized, Sivananda Yoga Teacher Training Course.

The Course
The students of the Sivananda Ashram are educated in Yoga, Vedanta, philosophy, ethics and meditation. The three courses are offered each year, in March-April, May-June and August-September. The duration of the courses is two months.

How to Reach Swami Sivananda Ashram of Rishikesh

By Air
At a distance of around 35 km, Dehradun airport falls the nearest to Rishikesh.

By Rail
The nearest railway station of Haridwar has direct train services to almost all the key cities in India.

By Road
A good network of roads connects Rishikesh with the other cities in Uttaranchal as well as the rest of the country.