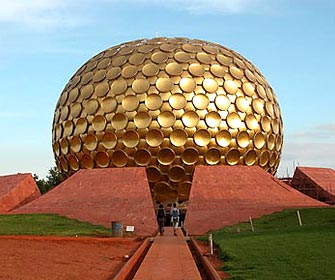 What is Auroville?
Auroville is a universal community in India, situated near the Pondicherry city. The city has been built to house a population of up to 50,000 people from around the world. The main motto of all the people living in the Auroville city, near Pondicherry, is to convert life into 'Supramental Consciousness'. It is also known by the name of Sri Aurobindo Ashram and is devoted towards 'unity of mankind'. Auroville intends to become such a city that will serve as a model to the cities of the future, cities where people will strive towards a harmonious future.

Basis of Auroville
The main raison d'être of Auroville comprises of the teachings of the Mother and Sri Aurobindo. The city was inaugurated on 28th February 1968. Representatives from approximately 124 countries attended the inauguration ceremony.

The Mother (1878-1973)
Mirra Alfassa, fondly called 'The Mother', was born to an Egyptian mother and a Turkish father. She was born in France and was the second child of her parents. She studied occultism in her twenties, in Algeria, and returned to Paris to work with groups of spiritual seekers. She met Sri Aurobindo in Pondicherry, in the year 1914, and immediately recognized him as a mentor she had already met in dreams.
She left India after the start of World War II, but came back to join Sri Aurobindo, in the year 1920. She was responsible behind the organization of Sri Aurobindo's followers into the Aurobindo Ashram of Pondicherry. In 1968, she commenced the project of Auroville Township as a means to implement Sri Aurobindo's vision.

The History Behind Auroville
The concept of an ideal city, devoted to unity of mankind, came to the Mother in the 1930s. However, it was only in the mid 1960s that Sri Aurobindo Society in Pondicherry proposed the formation of Auroville to Her. After She gave Her consent, the approval of the Government of India was taken. The government took this concept to General Assembly of UNESCO and the project received approval as well as commendation in 1966.

The Aurovilians
Citizens of approximately 35 countries make up the population of Auroville. They belong to different religions, castes, cultures, social classes, etc. The current population of the city is around 1700, with Indians making up one-third of the population.

Auroville Charter
How to Join Auroville
Before joining Auroville, it is recommended that the concerned person first visits the city. After staying here for three months, if he/she decides to join Auroville, an interview is arranged with the Entry Group, at the end of the guest period. An application form is filled and after he/she returns to Auroville, the joining process initiates.

Thereafter starts the Newcomer period of the new member, which lasts for two years. When the Newcomer period gets over, he/she again meets the Entry Group, which recommend his/her joining to the Residents' Assembly. In absence of any objections from the rest of the Auroville residents, the person becomes an Aurovilian.

By Air
The nearest airport is situated at Chennai, approximately 135 km Pondicherry city.

By Rail
The nearest railway station is at Pondicherry, well connected with Chennai.

By Road
The nearest road link is Pondicherry, which is well linked with most of South India.

Local Transport
After reaching Pondicherry, you can take a bus, a taxi or an auto rickshaw for traveling to Auroville.