Yellow bittern of India is one of the smallest members of the bittern species. It is found occupying the Asian countries of India, Sri Lanka, Japan and Indonesia. Yellow bitterns are scientifically known as Lxobrychus sinensis and are of Old World origins. They are shy by nature and are brilliant in the camouflage technique.

Physical Traits
Yellow bitterns of India are small birds, growing to an average length of 38 cm. The neck is short, but the bill is quite long. The male Yellow bittern is of dull yellow color on the upper side as well as the buff below. The head and neck are of chestnut color and the crown is black. The female Yellow bittern has streaked-brown crown, neck and breast. The chicks are pale peachish-pink in color and can climb even before they can fly. 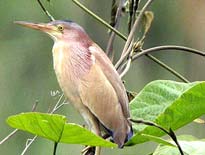 Yellow bitterns are also solitary creatures, which usually hunt on their own. They use their long sturdy bills to capture the prey. Yellow bitterns of India can slip rather easily and are also pretty good at quietly climbing among the bottom of reed beds and undergrowth. Usually, they hunt from cover. However, at times, one can also see them foraging over floating vegetation, like water-hyacinth beds. The birds are more active during dawn and dusk.

Status
Yellow Bittern is protected under the Migratory Bird Treaty Act of 1918.