Greylag goose, Anser anser, is one of the Old World species of birds and was known in the pre-Linnean times as Wild Goose. It has ancestral relations with the domesticated geese of Europe and North America. Gray Lag Goose is a very frequent winter visitor to the north regions of the Indian subcontinent.

Physical Traits
Greylag Goose is quite a large bird, measuring between 74 and 84 cm. Its wingspan is around 149 to 168 cm. The head is quite large in proportion to the body and the bill looks almost triangular in shape. The color of the bill is orange-pink, while that of the legs is pink. The call of the Gray Lag Goose of India is quite loud and it goes like 'kiYAAA-ga-ga'. The bird weighs somewhere around 3 to 4.5 kg. 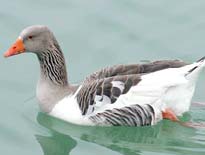 Greylag Goose usually forms long-term monogamous relationships, which continue over the entire lifetime. However, some birds in heterosexual pairs may engage in licentious behavior also. One can also find homosexual pairs amongst Greylag Goose bird. Greylag Goose is extremely sensitive to disturbance at the time of breeding and thus, they should never ever be disturbed during that time in any way.

Natural Habitat
Greylag Goose is found in a number of European as well Asian countries, including Indian subcontinent and China. It is usually found inhabiting large wetlands.