Indian bittern is a bird belonging to the Ardeidae family of herons. Almost all the subspecies of Bitterns have a short neck and tend to be more secretive than the other members of the family. Indian Bittern birds form a monophyletic subfamily in the heron family of Botaurinae. They are usually found inhabiting the reed beds and other such swamplands. The diet of Indian bitterns comprises primarily of amphibians, reptiles, insects and fish. Read on to know about the subspecies of bitterns found in India.

Black Bittern
Black bittern, of the Old World origins, is a resident bird of India. The bright color of the bird easily distinguishes it from the other bittern species. In the daytime, one can find Black bitterns of India resting in trees or on the ground, amongst dense reeds. They tend to fly frequently and have a distinct booming call, mainly heard during the breeding season. 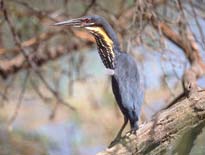 Little Bittern
Indian Little Bittern Bird is a native of the Old World and is scientifically known as Lxobrychus minutus. The natural habitat of the bird comprises of Africa, central and southern Europe, western and southern Asia and Australia. It may be quite difficult to spot a little bittern, as the bird usually spends its time hidden in dense reed beds.

Yellow Bittern
Yellow bittern of India is one of the smallest members of the bittern species. It is found occupying the Asian countries of India, Sri Lanka, Japan and Indonesia. Yellow bitterns are scientifically known as Lxobrychus sinensis and are of Old World origins. They are shy by nature and are brilliant in the camouflage technique.