Blue peacock is regarded as one of the most beautiful birds throughout the world. It is also the National Bird of the Indian subcontinent. Peacock is the name given to a male peafowl, while the female is known as Peahen. Scientifically known as Pavo cristatus (Linnaeus), the Peafowl of India is a swan-sized bird, with a long and slender neck. It is a forest bird, which usually stay on the ground. However, while roosting, it prefers to stay on trees.

Physical Traits
One of the most unique as well as distinctive features of the Blue peacocks is their beautiful train, comprising of tail feathers. The train is 1.4-1.6 m long, measuring more than 60 percent of the body length. It comprises of 100-150 highly specialized upper tail coverts. Whenever a peacock wants to attract a peahen, it erects the train into a fabulous fan. The entire body length of the Indian peacocks averages around 2.3 m and the wingspan is around 1.4-1.6 m long. Their weight hovers around 4.0 to 6.0 kg. 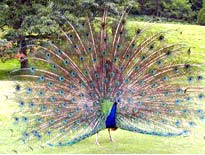 Indian peahen is almost brown in color, with the only exception being its white belly. The sole embellishment adorning the peahen is its prominent crest and the green neck feathers. Peahens are shorter than peacocks and measure not more than 1 m in length. Their weight is somewhere between 2.75 and 4.0 kg. The peacock as well as the peahen has a white patch under the eyes.

Natural Habitat
Peafowl can be found inhabiting open forests and riparian undergrowth in the India subcontinent. In southern regions, it can also seen in streamside forests, orchards and other cultivated areas.

Geographical Range
The geographical location of the Blue peafowl stretches on from eastern Pakistan through India and from the Himalayas to Sri Lanka. It is believed that the bird has become extinct in Bangladesh. In India, the area inhabited by the peafowl extends from the south and east of the Indus River, Jammu and Kashmir, east Assam, south Mizoram and the whole of the Indian peninsula.

Mating Behavior
Indian Blue peacock is polygamous by nature and can mate with upto six peahens at a time. The number of eggs laid falls between four and eight and the incubation period lasts for around 28 days. The eggs are usually laid in the afternoon and are light brown in color.

Diet
Blue Peacock is omnivorous and primarily consumes grains, insects, small reptiles, small mammals, berries, drupes, wild figs and some of the cultivated crops. One can find them foraging either early in the morning or just before sunset.

Status
Blue peacock has been provided with adequate safety. It has been fully protected under the Indian Wildlife Protection Act, 1972.