Black bittern, of the Old World origins, is a resident bird of India. The bright color of the bird easily distinguishes it from the other bittern species. In the daytime, one can find Black bitterns of India resting in trees or on the ground, amongst dense reeds. They tend to fly frequently and have a distinct booming call, mainly heard during the breeding season.

Physical Traits
The average length of Indian Black bittern bird is 58 cm. The bird is dark gray to black in color and has a stretched neck and a long yellow bill. The throat is covered with buff streaks and there are yellow streaks on the sides of the head, which stretch down to the neck. An adult Black bittern is entirely black on the above, with undersides that are white in color and have brown steaks. The babies are dark brown in color. The female is paler as compared to the male. 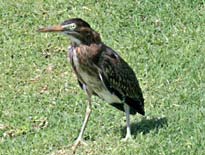 A solitary creature, Indian Black bittern makes pairs only in the breeding season. Nesting is also done alone and the nests, made up of sticks and reeds, are situated on a branch suspended over water.

Mating Behavior
Mating takes place in the months of December to March, in the reed beds. Three to five eggs are laid at a time, which are incubated by both the parents.

Natural Habitat
Black bittern bird of India occupies terrestrial and estuarine wetlands, where permanent water is present and the vegetation is dense. It may be seen in flooded grassland, forest, woodland, rainforest and mangroves also.

Status and Threats
Indian Black bittern bird is a threatened species. The main threats faced by the species include:
Facts about Black Bitterns