Physical Traits
Indian Cinnamon bittern has a short neck and a long bill. It grows to a length of around 38 cm. A female as well as a young cinnamon bittern is black in color and has a brown crown. The only difference is that the lower portion of the babies is heavily streaked with brown. The body of the males is entirely cinnamon in color.

Behavior
Indian Cinnamon bittern bird is a lonely creature, which prefers to hunt on its own. It even sleeps alone, on platforms of bent-over grass stems. 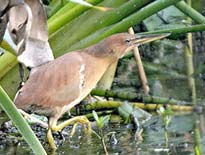 The breeding season of Cinnamon bitterns of India stretches throughout the year. The nests are made in shrubs, on platforms of reeds, out of short pieces of reeds, grass or other vegetation. Four to six eggs are laid at a time and the chicks are creamy-white in color.