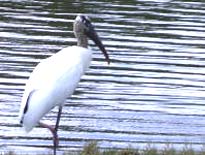 Indian stork is one of the 17 different species of storks found throughout the world. The only continent where storks are not found is that of Antarctica. The natural habitat of the storks comprises of Indian fields, savannas and marshes. One of the large wading birds, they are characterized by black, gray or white feathers and long, tough bills. The diet of the storks of India primarily includes fish, insects and dead animals. In the following lines, we have provided information on the different species of the storks of India:

Painted Stork
Painted stork is a tropical species, belonging to the stork family of Ciconiidae. The bird is found in the Asian continent, covering the area from India and Sri Lanka to Southeast Asia. Broad-winged soaring birds, the Painted storks of India fly with their neck outstretched. They are resident birds and are found in Indian lowland wetlands, with trees.

Black Necked Stork
Black-necked stork is a large bird, known scientifically as Ephippiorhynchus asiaticus. It belongs to the Ciconiidae family and counts amongst the huge wading birds of the Indian subcontinent. Black-necked stork is a resident bird of southern Asia and Australasia. The area inhabited by Black-necked storks stretches on from India east to New Guinea and the northern half of Australia. Just like numerous other storks, they also fly with their neck outstretched.