Jungle bush quail bird is one of the species of quails found in South Asia. The bird is usually seen in small coveys and is quite shy by nature. One can get a glimpse of the Jungle bush quails of India mainly when they burst out into flight from under the vegetation.

Physical Traits
The average height of Jungle bush quail is around 6.5 inches. The head of a male quail is red in color and has a slight brown mottling on top. The breast is speckled with white and black color. The back is spotted with black, brown and yellow. The female is also quite similar to the male, but the breast is speckled with pink/red instead of black and white.

Behavior
Jungle bush quail is a very shy bird and is observed to be quite wary in the wild. They love to absorb sunrays and require a lot of grassy cover to adapt themselves to captivity. The male Jungle bush quail is very protective of the female as well as the newly hatched chicks. Jungle bush quails are gregarious by nature and are usually found in tight coveys of approximately a dozen birds. However, the males turn extremely aggressive as well as territorial during the mating season. 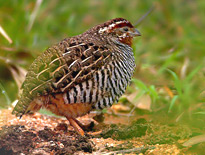 Jungle bush quail survives on a diet comprising of a variety of grass and weed seeds, like pannicum, millet, maw and lentils. They also eat maggots and small insect larvae.

Natural Habitat
The natural habitat of the Jungle bush quails mostly consists of the Indian dry grasslands. However, one can also find the bird in the wooded areas of the country. Apart from India, Jungle Bush Quail bird is found in Sri Lanka.

Mating Behavior
Male Jungle Bush Quails attain maturity at about 6 months of age. The eggs are laid on consecutive days during the spring season i.e., around mid-April. The number of eggs laid falls between five and seven and is usually an odd number. The incubation period ranges from 19 to 20 days.