Greater Indian Hornbill is considered to be the largest member of the hornbill family. Scientifically known as Buceros bicornis, it is usually found inhabiting the forests of Indian subcontinent, the Malay Peninsula and Sumatra, Indonesia. The average lifespan of the Great Pied Hornbill of India exceeds 35 years and may go upto 50 years in captivity.

Physical Traits
Great Indian Hornbill is a large bird, which grows to a height of around 100 to 120 cm. It wingspan measures somewhere around 150 cm and the tail feathers are 36 inches in length. The Great Hornbills of India have an average weight of 6.5 pounds. The bright yellow and black casque adorning the top of the huge bill of the bird adds to its magnificent appeal. The casque is hollow and used only at the time of aerial casque butting flights. The female hornbill is shorter than the male and has blue eyes instead of red. 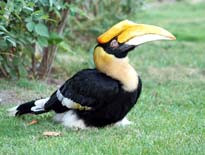 The diet of the Great Pied Hornbill of India consists primarily of fruits. However, the bird supplements this with small mammals, birds, lizards, snakes and insects.

Behavior
The Great Pied Hornbills of India are known to form monogamous pair bonds. They are mostly seen in groups of 2-40 individuals. Great Indian hornbill forms a pair for many years and in some cases, for the entire lifetime. The female hornbill lays 1-2 eggs at a time.

Unique Nesting Ritual
At the time of nesting, the female hornbill starts living in a tree hollow sealed with dung and pellets of mud. The male collects the pellets, swallows them and regurgitates small saliva-cased building materials. This material is given to the female, along with food, through a slit in the tree seal. The process of incubation continues for 6-8 weeks. The female hornbill comes out only after she has molted and fresh feathers have grown on her and her young ones.

Status
The population of Great Pied Hornbill of India is declining over the years. The reason for this is habitat loss, along with hunting of the bird for food and for its casques. Great Indian Hornbill has also been listed in Appendix I of CITES and also as 'Lower Risk/Near Threatened' by USFWS.