Local Name
Grey Francolin of India is locally known by the names of Teetar and Bhoora (brown) Tittar. The name Teetar is based on the call of the bird, which comes as 'Ka-tee-tar-tee-tar'.

Physical Traits Grey Francolin is a stub-tailed bird and is grayish-brown in color. Male francolins may have upto two tarsal spurs, while the females have none. The population residing in northwestern areas of the Indian subcontinent is the grayest of all the Grey Francolin subspecies. The species inhabiting peninsula boast of a dark rufous throat, supercilium and more brown coloration. 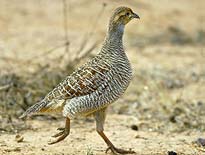 The mating season of the Grey Francolin of India falls in the months of April to September. The gestation period lasts from 21 to 23 days. The female lays 4-9 eggs at a time and the nest comprises of a hidden scrape on the ground.

Natural Habitat
The natural habitat of the Gray Partridge of India consists of grasslands and scrublands. One can also spot the bird in the cultivated areas as well as near villages. Grey Francolin is found inhabiting the plains and drier parts of South Asia.

Status
The past few decades saw the population of Gray Francolin showing a downward trend. The reason for this was large-scale hunting as well as trapping of the bird. However, after the Indian government imposed a ban on it's hunting, the situation has improved to quite an extent.