Indian Little Bittern Bird is a native of the Old World and is scientifically known as Lxobrychus minutus. The natural habitat of the bird comprises of Africa, central and southern Europe, western and southern Asia and Australia. It may be quite difficult to spot a little bittern, as the bird usually spends its time hidden in dense reed beds. At times, you may see the bird gliding quickly over the top of the reeds. During the breeding season, the bill of a little bittern acquires a distinct red tinge.

Physical Traits
A very small bird, the Little Bittern of India is between 27 and 36 cm in length, with a wingspan of 40 to 58 cm. It weighs around 60 to 150 gm and is one of the smallest herons in the world. The short neck of the bird is complimented with a long bill and buff underparts. The male has black back and crown and the wings are also black, with a large white patch on each wing. The female has a browner back and a buff-brown wing patch. 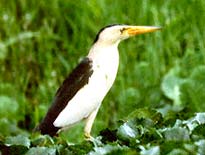 Protection Status
The Agreement on the Conservation of African-Eurasian Migratory Waterbirds (AEWA) applies to the India Little bitterns.

Mating Behavior
Just like most other bitterns, Indian Little Bittern also breeds in reed beds. Four to eight eggs are laid at a time.

Diet
Insects, fish and amphibians make up the diet of the Little Bitterns of India.

Facts about of Little Bittern