Indian Crested Serpent Eagle, a member of Accipitridae family, is scientifically known as Spilornis cheela. It is a specialist reptile eater, which mainly hunts snakes and lizards.

Physical Traits
A medium-sized raptor, Crested Serpent Eagle of India is 55 to 75 cm in length. The adult eagle is adorned with brown plumage. The upper portion of the body, including the breast and head, is dark brown in color, while the wings and scapulars are covered with white spots. The inner parts of Indian Crested Serpent Eagles are quite pale in color, almost pale reddish-brown.

The tail as well as underside of flight feathers are black and have a broad white band. There is a crest on nape, which is again of brown color, barred with white. The bill is quite strong, black in color and slightly curved. Eyes, legs and feet are yellow. The wings are short and broad. The young birds have white colored head, underparts and underwing. 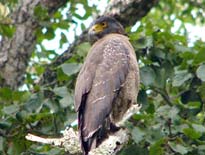 The first few days of the young ones after hatching are spent under the protection of the parents. The feathers start appearing after 21 days. By one month, almost the whole body of the chicks gets covered with feathers and they are able to stand independently. The first flight is taken only after crossing two months of age.

Behavior
Crested Serpent Eagle is a solitary creature, found occupying the same territorial boundaries for years. However, it may form pairs, in which case, the companionship continues throughout the year. The call of a Crested Serpent Eagles is quite distinctive and comes across as 'Kluee-wip-wip'. One can hear them calling mainly in the morning.

Geographical Range
The geographical region of Crested Serpent Eagle includes the area from South Asia, including Indian subcontinent and Sri Lanka, to Southeast Asia and further extending to southern China and Indonesia.

Mating Behavior
Crested Serpent Eagles has the habit of living in the same place for years to come. Even the nesting takes place in the same area every time, though not the same tree. The nest is made up of sticks and is situated at a height of not less than 6 m. The female lays only one egg at a time and the incubation period lasts for about 35 days. The breeding season varies from one place to another. The responsibility of feeding the chicks is shared by both the parents.

Diet
The diet of the Crested Serpent Eagle of India mainly includes reptiles like snakes, lizards and frogs. Small birds and small mammals such as mice, and large insects also form a part of the diet.

Status
Indian Crested Serpent Eagles are facing a major threat from the loss and deterioration of their habitat.