Pond herons are one of the most commonly found species of the Indian subcontinent. Docile by nature, they can be seen in their natural habitat as well as on the outskirts of villages. The first description related to the Pond heron bird was given in the year 1832, by Colonel W. H. Sykes. The bird belongs to the Old World species and is scientifically known as Ardeola grayii.

Physical Traits
One of the smaller subspecies of the heron bird, Pond heron of India has a buff-brown back. It has a small neck and even the bill is tiny and thick. As the summer season approaches, the feathers on the neck of adult herons start growing and become long. The wings of the Pond herons are white in color. This is the reason that when they gain flight, they look totally white. The bird is quite similar in appearance to the Squacco Heron. 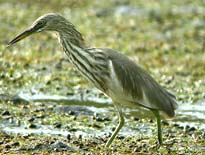 Mating Behavior
The breeding habitat of the Pond herons consists of mainly marshy wetlands in warm countries. They nest in small colonies, mostly with other wading birds. The number of eggs laid falls between three and five.

Diet
Pond herons feed on a diet of insects, fish and amphibians. One usually finds the bird standing all hunched up at a far corner of a water body. It watches and waits patiently till the time the prey comes within reach. The moment this happens, the prey is pulled out in a flash.