Physical Traits
Gray Heron bird of India has a white head, along with a broad black supercilium and slender crest. The young ones, on the other hand, have a dull gray head. Adult Grey herons stand at a height of 90 to 100 cm, with the wingspan being 175 to 195 cm. Their weight is somewhere around 1 kg to 2 kg. The upper half of plumage is gray, while the lower half is off-white in color. The bill is of a pinkish-yellow color and the color becomes brighter in case of breeding adults. The neck of Grey herons is long and has an S-shape. 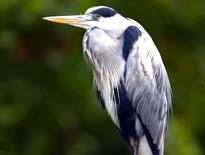 Grey Herons are found occupying temperate Europe and Asia and parts of Africa. One can also find the bird inhabiting milder south and west regions. However, most such birds migrate from the colder regions in winter season.

Diet
The diet of Grey Heron comprises of fish and frogs, which it catches in shallow water. It also consumes small mammals and birds.