Night heron belongs to the Nycticorax and Gorsachius genera. It is a medium sized bird, which is mainly found in the tropical regions of the Indian subcontinent. The name 'Night Heron' is derived on the basis of the fact that these birds prefer to catch their prey during night.

Physical Traits
Night herons have a body coat of either white or gray color. The only exceptions to this are their crown and back, which are pretty dark in color. Adult Night herons have short necks and short legs. The young ones have a coat that is brown in color and is dotted with white and gray. Infact, the young night herons look quite similar to Nycticorax species.

Behavior
Night heron bird of India nests in colonies, built upon platforms of sticks. The nests are situated mostly in a group of trees. In case of protected locations such as islands or reed beds, night herons may build nests on the ground. During daytime, they are seen resting in trees or in bushes. Night herons usually lay 3 to 8 eggs at a time. 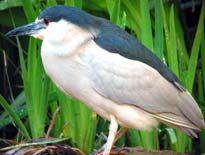 The diet of a night heron bird comprises of small fish, crustaceans, frogs, aquatic insects and small mammals. They catch their prey by standing still at the water's edge. The moment any prey approaches, it is ambushed.

Status
Presently, Indian subcontinent has only seven subspecies of the night heron, which are existent. A number of other subspecies of the bird have gone extinct because of its capability to colonize small, predator-free oceanic islands and a tendency to evolve towards flightlessness.