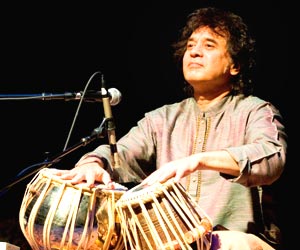 Born: March 9, 1951
Achievement: Considered as the chief architect of the contemporary world music movement; youngest percussionist to ever be awarded the title of Padma Shri

Zakir Hussain is a classical tabla virtuoso and the most famous tabla player in India today. His contribution in the field of percussion and in the music world at large is highly appreciated.

Ustad Zakir Hussain was born on March 9, 1951. His father Ustad Allarakha was himself an established tabla player. Zakir Hussain did his schooling from St. Michael's High School in Mahim and completed his graduation from St Xaviers, Mumbai. Zakir Hussain was a child prodigy and started touring by the age of twelve. He came to the United States in 1970 and started his international career.

Zakir Hussain is widely considered as the chief architect of the contemporary world music movement. He founded much historic collaboration. These include: Shakti, which he founded with John McLaughlin and L. Shankar, the Diga Rhythm Band, Making Music, Planet Drum with Mickey Hart, and recordings and performances with a number of artists such as George Harrison, Joe Henderson, Van Morrison, Jack Bruce, Tito Puente, Pharoah Sanders, Billy Cobham, the Hong Kong Symphony and the New Orleans Symphony.

In 1987, Zakir Hussain's first solo release, "Making Music," was acclaimed as "one of the most inspired East-West fusion albums ever recorded." In 1988, Zakir Hussain became the youngest percussionist to ever be awarded the title of "Padma Shri" by the Indian government. In 1990, he was awarded the Indo-American Award in recognition for his outstanding cultural contribution to relations between the United States and India. In April, 1991, Zakir Hussain was presented with the Sangeet Natak Akademi Award by the President of India. Zakir Hussain is also the recipient of the 1999 National Heritage Fellowship, the United States' most prestigious honor for a master in the traditional arts.

Zakir Hussain has composed soundtracks for several movies, notable among them are "In Custody" and "The Mystic Masseur" by Ismail Merchant. Zakir Hussain has also played tabla on the soundtracks of Francis Coppola's "Apocalypse Now", Bernardo Bertolucci's "Little Buddha".