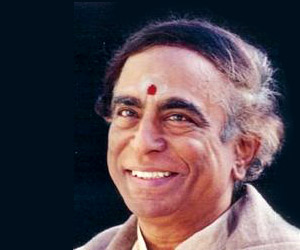 Born - 17 September 1930
Achievements - Having an inclination towards music from childhood and having received a strict training under renowned teachers, Sri Lalgudi Jayarama Iyer started his musical career at the age of 12. He is also credited for being the first to draw international attention to the Carnatic style of violin playing.

When it comes to rendering Carnatic music on a Violin, none measure up to the legendary Sri Lalgudi Jayarama Iyer. His mastery over this instrument and the consequent development of his own individual style has unfailingly had a spell bounding effect on those who have had the opportunity to listen to him. Perhaps nothing less could be expected out of a disciple who has received rigorous training under his father, Late VR Gopala, who was the illustrious disciple of the great saint musician Thyagaraja.

Keep reading this biography to know more about the life history of Sri Lalgudi Jayarama Iyer, who initiated his music career as the tender age of 12 as an accompanying violinist. Bestowed with a sharp understanding of music and having had a strict training under reverent teachers, it did not take Iyer long to stride up to the forefront alongside the top league musicians of his time. Sri Lalgudi Jayarama Iyer shirked the treaded path and went on to churn out his own distinct style of music that came to be known as 'Lalgudi Bani'.

All throughout his life history, Iyer has been in great demand by accompanying vocalists. He has even played alongside several like Ariyakudi Ramanuja Iyengar, Chembai Vaidyanatha Bhagavatar, Semmangudi Srinivasa Iyer, G. N. Balasubramaniam, Madurai Mani Iyer, Maharajapuram Santhanam, D. K. Jayaraman, etc. Though Iyer has many laurels to his credit, the most pertinent among all is the fact that he was chiefly responsible for drawing international attention to the Carnatic style of Violin playing.

Iyer has performed extensively all throughout his life both at home and abroad. The Government of India sent him to Russia as a member of the Indian Cultural Delegation. During the 1965 Edinburgh Music Festival, eminent violinist Yehudi Menuhin, who was visibly impressed by Iyer gifted him his own Italian violin. Moreover, when his musical recordings was forwarded to the International Music Council, Baghdad, Asian Pacific Music Rostrum and Iraq Broadcasting Agency by AIR Delhi, it was adjudged as the best and accorded the first position out of 77 entries received from across the globe during 1979.