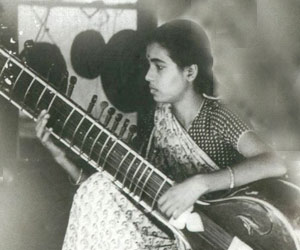 Born - 1926
Achievements - she was the only female maestro of the Surbahar or the bass Sitar in the classical music genre in India. Daughter of the reverent musical exponent, Allaudin Khan, Annapurna Devi married his disciple, sitar expert, Ravi Shankar. Though Annapurna Devi never took up classical music as her profession and has not recorded any music album, yet she got ample respect and love from everybody.

Annapurna Devi, who was born as Roshanara Khan in 1926 at Maihar in the Indian state of Madhya Pradesh, was a secluded maestro of Surbahar or the bass Sitar in the classical music genre. Her father Ustad Alauddin Khan, who also happened to be her guru, was the founder of the famous Senia Maihar Gharana or the Senia Maihar School and was regarded as a marvel in the 20th century Indian classical music.

Read on further about the life and family history of Annapurna Devi, whose uncles Fakir Aftabuddin Khan and Ustad Ayet Ali Khan also were considered eminent musicians in their homeland Bangladesh. The brother of Annapurna Devi, Ustad Ali Akbar Khan is deemed as one of the best living Sarode players of India. Whereas her spouse, Sitarist Pandit Ravi Shankar ranks among the most popular Indian classical musicians in the west.

Under the guidance of her father, Annapurna Devi emerged as a proficient Surbahar maestro of the Maihar Gharana just within few years of taking music lessons. Soon she even started giving music lessons to the some of the students of her father like Pandit Nikhil Banerjee and Ustad Bahadur Khan. It was during this time that one of the disciples of Ustad Alauddin Khan, Ravi Shankar fell in love with Annapurna and asked her hand in marriage from his teacher.

Read on the biography of Annapurna Devi, whom the renowned Indian musician Ravi Shankar wedded when he was just of 21 years and Annapurna all of 14. And post marriage, Annapurna turned into a Hindu. Though a tumultuous one, the marriage lasted for some 20 years during which the couple gave birth to a son, Shubhendra Shankar. As a teacher, she has had many noteworthy students like Ustad Aashish Khan, renowned flautists Hariprasad Chaurasia and others.

Some time in the 1970s, Annapurna Devi has also taught Surbahar to the late sarod player Vasant Rai's wife kokila Rai. And in the current times, all of them are contributing towards carrying forward the legacies of Annapurna Devi and thus, her father Ustad Alauddin Khan's music through their recitals. Though Annapurna Devi never took up classical music as her profession and has not recorded any music album, yet she got ample respect and love from everybody.