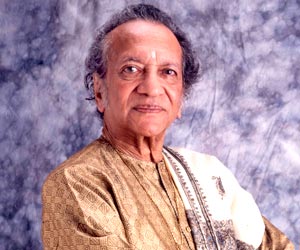 Ravi Shankar is a legendary sitar player and one of India's most esteemed classical musicians. Pandit Ravi Shankar has made a major contribution in popularizing Indian classical music in the West through his association with The Beatles (especially George Harrison).

In 1938, Ravi Shankar gave up a possible dance career and started learning sitar under Allauddin Khan, founder of the Maihar Gharana of Indian classical music. Ravi Shankar's formal training ended in 1944. Thereafter, Pandit Ravi Shankar joined the IPTA and composed music for several ballets, started Renaissance artistes in 1947 and was in charge of Vadya Vrinda at the All India Radio in 1949. Ravi Shankar first performed outside India in the Soviet Union in 1954. He also performed at major events such as the Edinburgh Festival as well as major venues such as Royal Festival Hall. In 1960s, Ravi Shankar's fusion with George Harrison, a member of The Beatles became very popular in the US and helped in popularizing Indian classical music in the West.

Pandit Ravi Shankar has won several honours and awards. These include: Padma Vibhushan, Magsaysay Award, two Grammy Awards, Fukuoka Grand Prize from Japan, and the Crystal Award from Davos. In 1999, Ravi Shankar was awarded with Bharat Ratna, India's highest civilian honour. He was also a nominated member of the Rajya Sabha, India's upper house of Parliament, from 1986 to 1992.