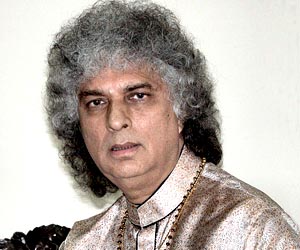 In the early decades of the twentieth century, santoor, also called as Shata-Tantri Veena, was used as an accompaniment to a specific type of singing called Sufiana Mausiqi. Pandit Uma Dutt Sharma was convinced of the potentialities of the instrument and after extensive research on santoor he bestowed the responsibility of establishing it on the concert platform on his only son Pandit Shiv Kumar Sharma.

Shiv Kumar Sharma modified santoor to make it more suitable for his classical technique. He introduced the new chromatic arrangement of notes and increased the range to cover full three octaves. He also improvised a new technique of playing with which he could sustain notes and maintain sound continuity. Shiv Kumar Sharma brought Santoor at par with other classical instruments, well established it not just all over India, but also across the globe.

Pandit Shiv Kumar Sharma is the recipient of many national and international awards. These include: Sangeet Natak Academy Award (1986), Maharashtra Gaurav Puraskar (1990), Honorary Doctorate from the University of Jammu (1991), Padmashree (1991), Ustad Hafiz Ali Khan Award (1998), and Padma Vibhushan (2001). He is also received the honorary citizenship of the city of Baltimore, USA (1985).